Players: How will Judge Roberts fare on the "Highest Court in the Land"? 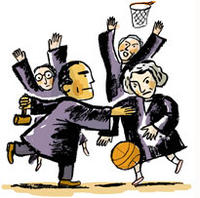 Not so well, say fellow Supreme Court clerks in the New York Times. "The Rehnquist clerks were a force to be reckoned with ''on that horrific cement court above the library,'' recalled James J. Brudney, a law professor at Ohio State who clerked for Justice Blackmun. But Mr. Roberts brought more enthusiasm than skill to the game. ''He played an aggressive style of basketball that left other co-clerks with the bruises to show for it,'' Mr. Knauss[a fellow Rehnquist clerk] said of Mr. Roberts. Professor Brudney recalled that Mr. Colson [another Rehnquist clerk] was the best athlete in the group and so was not shy about shouting commands. When one of Mr. Roberts's shots went awry one afternoon, Professor Brudney said, ''Dean Colson screamed 'way off!' to tell people where to position themselves.'' That did not sit well with Mr. Roberts. ''You heard this somewhat meek but still assertive voice,'' Professor Brudney said, recalling Mr. Roberts's words: '''Just ''off'' would have been sufficient."
Posted by Drew Halfmann at 9/27/2005

Other players report that Mr. Roberts refused to answer questions regarding his defensive assignment, how he would handle the screen-and-roll, and even what team he was playing for.

I'm confused. I always thought that the "highest court in the land" was wherever the Portland Trail Blazers happened to be playing that night.