Fantasies: Could you score on an NBA player on your home court? 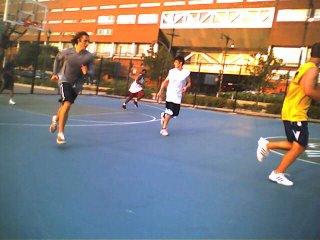 The most popular Setshot post of all time considered the question above. A second post provided a quasi-empirical test. Now for another stab. I had always imagined my faceoff with Paul Shirley on some NBA court--say the Garden. The lights would be dimmed in the house, other players would be shooting around after practice, and I'd be shitting bricks about just stepping on to such hallowed hardwood.

But I recently came across some photos of Steve Nash playing pickup with some regular joes in Tribeca (also see the story referencing this and accompanied by some cheesy boudoir photos of Nash).

Eureka! What if Shirley came to my court? Surely, this would give me an edge of some sort? I could force him to dribble over that annoying crack in the pavement or choose the backboard that tilts at a 75 degree angle.

Are you with me?

Also on that thread: I was flipping around yesterday and came across a show on Spike called Pros Vs. Joes, in which amateur athletes compete with retired pros -- in this case, Clyde Drexler, Rebecca Lobo, John Rocker, and some soccer players, swimmers, and other people I never heard of. Most of the time, as far as I could tell, they're competing in a sport other than the athlete's speciality. But while I was watching these three guys tried to get a hit off Rocker (Rocker was throwing in the 80s). For the most part, they didn't make contact, but I saw one guy hit a foul ball, and the "coming up next" bit suggested that one of them would eventually hit a line drive to the outfield.

So I imagine if one watched long enough one might get to see a regular dude play one on one with Drexler or Lobo.

Hey, that's the court across from BMCC. I used to work across the street from there, literally. I never saw steve nash.

That said, it goes without saying that I would score against Nash.

Beef Jerky - the perfect snack.
Available at Jerkyahoo:
http://jerkyahoo.jerkydirect.com
"The best beef jerky on this side of the grass"

I don't think that people understand the speed and power of the worst NBA player, on the end, of the end of the bench.

You have to realize that the guys sitting on the last spot on the end of the bench are good enough to start on the majority of elite NCAA schools. There are no absolutely bad players in the league, they practice everyday against the elite and just through that, develop enough of a mental game to stop any weekend warrior.

The gods CHEATED because they didn't want you to learn.
Their Manifest Destiny positioning allowed them to hide behind this posiitoning, ensuring their effectiveness for another day.