Seriously, Barack Obama is a baller 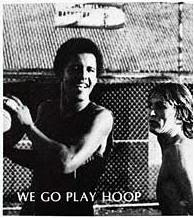 Last year, Setshot endorsed Barack Obama for President based on reports about his lifelong love of basketball. By all accounts, he continues to play and so, like each of us, he is an aging baller. Now, as if speaking directly to the Setshot community, he has promised to build a basketball court in the White House if he is elected.

What's more, he wants to build his court over a bowling alley that Nixon commissioned. Out with the exclusionary, imperialist Alley of Shame and in with the Obama Hardwood of Racial Harmony!

Setshotters, here's the real question: How are we going to finagle ourselves a pickup game on President Obama's court? Could it be as easy as showing up and calling next?

*Update: Great footage from HBO showing Obama playing pickup ball. He looks pretty good, but clearly can't go right at all. Thanks to our friend Sully for the link. And another clip from friend and Jazz fanatic Matt. Sweet passing!

A news article about the Obama Court is reprinted below.

Many years ago, President Richard Nixon had a small bowling alley built in the White House.

If Sen. Barack Obama is elected president, he will replace the bowling alley with something more suitable to his tastes: a basketball court.

"There's not only a chance (that he'll have one built), but it's a guarantee," Obama said Monday on WFNI 1070 The Fan.

When it comes to basketball, Obama knows his stuff. During a 10-minute conversation, he talked about his NCAA bracket -- well, what's left of it. He talked about his days as a high school player in , where his team won the 1979 state championship. He brought up Eric Gordon, saying "he could use some guidance." And he talked about becoming the Baller In Charge, saying he would have a basketball court constructed inside the White House.

"I tried bowling (Sunday) in and threw two gutter balls," Obama said. "So we'll have a basketball court, at least a decent half court."

He described himself as "a slasher, a three, maybe a poor man's Scottie Pippen or Tayshaun Prince -- a guy like that without as much talent.''

A few possible appointments Baller in Charge Obama might consider:

And as an insurance policy against possible assassination, how about Charles Barkley for veep?