Psychology: Who do you think you are? 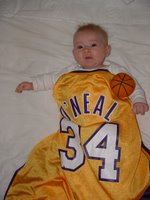 With the NBA season underway, I thought that it would be a good time to raise a topic that Cary had recently suggested. The question is: Do you ever imagine yourself as a pro basketball player, and if so, who do you imagine yourself as?

Nowadays, I don't really ever imagine myself as anyone else, but I often imagine that I am a better version of myself. The weather has been getting "bad" here in Berkeley of late, so there have been quite a few nights of lonely foul shooting at Ohlone Park. The imagination runs wild. Jeff can dunk! Jeff is breaking ankles! Jeff pins that weak shit against the glass!

When I was a teenager, there were two pro basketball players that I liked to think of myself as. The first was John Stockton. Being small, I had to learn to play PG, and soon fell in love with passing. Stockton was an obvious role model at that time. NBA highlight shows would play reel after reel of "STOCKTON TO MALONE!" and I liked to think of myself finding all those tiny passing lanes and fooling all the big guys with my lookaways.

However, PG is not my natural position. My natural position is center. When I first started playing, I had no handle and no range, but I could jump really high and had good timing, so I got lots of rebounds and blocked a ton of shots for someone my size. In pickup games, I'd go down low and pretend that I was Patrick Ewing. I remember seeing tape of that Georgetown game where Ewing goaltended all those shots and thinking that it was so cool, so intimidating, that blocking shots became my favorite thing in basketball. And believe me, when a little skinny asian kid blocks your shot, you're gonna hear about it.

I even taught my baby sister a bunch of big man trash talk. I'd take her to the park when I had to babysit, and she became a sort of mascot there. During shootarounds, I'd bring her onto the court and hold the ball in front of her. I taught her to slap the ball out of my hands and say "Get outta my house!" or simply "Ewing!" in her squeaky little voice. So cute. Actually, the cutest thing was when she would say "money" as she shot the ball, it went about two feet in the air, and rolled to the sideline.

Ok Setshotters, who are your NBA role models? Anyone who says Kobe Bryant gets a free trip to Guantanamo Bay.

If I had to pick one current NBA guy, I'd say it'd be Kirk Hinrich. I'm white. I'm short. I have kinda funny dark hair.

In seriousness, in athletics, I always prided myself on being quicker than the other guy. In some cases it was true (playground football), in others (like hoops) it wasn't. But the smaller PGs (or in football, the speedy WRs) were the types of players I'd want to be.

Since I don't want Nash's creaky back or Steph's tattoos or AI's platinum, I'll go with Hinrich.

Juice,
I'm gonna post up that picture of Hinrich that you sent me so that readers will know what you look like, and what your lifestyle is like. See above.

It's true. Me and Hinrich lead strikingly similar lives. As anyone that's spent more than 5 minutes with me can attest, the ho's in this photo pale in comparison to the ones that tend to follow me around.

And by ho's, I mean squirrels when I walk my dog.

You know that Kirk Hinrich visualizes himself as the Pimp Justin Perras in his mind when he's not playing basketball. And this brings another question: Since we all kind of fantasize about being NBA players, what do NBA players dream about in their minds? What's their unattainable goal they wish they could do?

I kind of picture myself-albeit entirely without reason or any comparison in real life-to a 6'8 swingman type player, kind of Scottie Pippen, multi skill, big man who doesn't score a ton but can do everything else well type. In reality, I'm not big and have no handle at all except for one between the legs dribble I can do, so this is laughable. One player that was totally awesome video games in the late 80's early 90's that gets forgotten was Lafayette "Fat" Lever, who scored about 10 a night but almost always had triple doubles. Nate McMillan was another dude like this, kind of a poor man's Lever, who was a poor man's Pippen. Eddie Jones is another dude I always kind of emulated.

As far as pimp comparisons go, I would say I'm kind of the mack Cecil Fielder. If you know me you know why I say this. And it's not because I'm a 260 pound DH.

I have conducted a comprehensive survey of professional basketball players. When asked "What is the one thing you wish you could do?" -- 88% responded with "Write a blog for aging hoopsters." (Four percent said "Kick Kobe's ass.")

As a 5'11, 230 lb black dude from Brooklyn, I often dream that I'm Kyle Kover. Yes, I fantasize about having a jumpshot and baring a striking resemblance to Ashton Kusher, in hopes of banging aging Hollywood actresses that suffer from a midlife crisis. Yeah... that's it.... either him or Tyrone Hill...for the same reasons of course.

Hey Jeff, do you think I can get the phone number of the woman on the right? I hear frat chicks really dig balding 30 year old DJs...

Cary, you bastard. That's my mom!

Man, if I had a quarter for every time I heard that one...