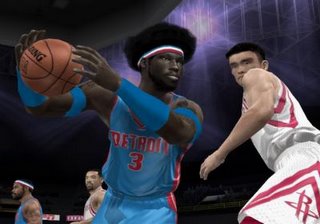 We tend to take our hair for granted when we're young. We can do whatever we want with it. Grow it long. Shave it off. Shave some of it off. But aging takes its toll on our coiffability. Many of us start losing our hair. We go gray. Our fine, gleaming locks become bristly and stiff.

So while we still have some left, let's talk about the coolest hoops hairstyles. My favorite ever was on an asian kid I used to play with in Boston. His hair was cut marine-short all over, except for his bangs, which grew down to his chin. This wouldn't have been that remarkable except that he always rebounded one-handed, which made his bangs fly all over the place in a really neat way. I attempted this hairstyle myself for a while, but my head is too oval and I looked stupid. Plus, I rebound with two hands.

There was another white guy I knew who had a big curly afro. Again, no big deal, except that he always came to the gym in a full 1970s-style Lakers uniform, complete with short shorts and striped socks. This dude looked like he'd been time-warped straight from Walt Frazier's corporate basketball camp. He even played like he was from the 70s, with a straight up-and-down dribble and a two-handed quasi-set shot. And, he was awesome!

I watched the marathon Gonzaga-Michigan State game recently in Maui, and if I hadn't been rooting for the other team, Gonzaga's Adam Morrison would be my new favorite player. Putting his considerable skills aside for the moment, you have to love the old-school hair, the old-school striped socks, and best of all, the wispy tenth-grade mustache.

and for the socks:

- Chris Andersen, who has had everything from a '70s style perm to an 80s style perm, and now is rocking Bjorn Borg-like long hair w/ headband.

- Ben Wallace, for the sheer power of his 'fro

- Cary Broder, who stunned me when he showed up one day with a shaved head. He automatically got scarier and more intimidating on the court.

You white guys got screwed back when Rik Smits and Detlef Schrempf had to shave their heads because all the other Pacers did it. Was it 1999? 2000? I'm guessing that it was Jalen Rose's idea. Rose, Reggie Miller, Mark Jackson and the rest looked fine, but The Flying Dutchman looked like he just escaped from an alien science fair.

I believe that was during the series when the Pacers beat the Knicks in 7 games, when Ewing's short runner went in and out in the last second of the final game. I remember Smits looking hideous at the time. I don't think Scot Pollard would look any better nowadays tho, even though he might be better off without those porn-star looking mutton chops.

Also, leave Ha Seung Jin out of this! All asian dudes have to go through a horrific hairstyle period. It's like a rite of passage or something. You know, like when Jews get circumcised. Asians have to go get a bad haircut or we get cut out of our parents' wills.

Remind me to bust out my junior high yearbook next time you guys come over.

I apologize for my cultural insensitivity. I didn't realize that having a bad hairstyle was a rite of passage like that. Are there special bowls you have to buy in order to cut hair like that for the ceremony?

Since this is turning into a glorious cultural exchange site, I do have some photos of my "brit milah" ceremony when I was a couple of days old, so I'll have to remember to post th...uhhh, never mind.

For those of you who aren't Jewish, brit milah means "removing a few inches from an infant at an early age to ensure that he won't ever be able to dunk and will dedicate his full energy to studying talmud instead" in hebrew.

Jeff! I have a big crush on you! And I don't mind the infirm. You sound sexy to me.

Sheesh, Some guys get all the luck. And after my best joke on Setshot I still get no play. Then again, that was probably Justin or the Mayor from that court in Berkeley posting that, but still....

Who knows where to download XRumer 5.0 Palladium?
Help, please. All recommend this program to effectively advertise on the Internet, this is the best program!