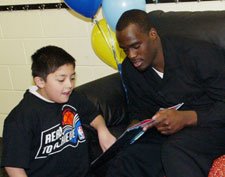 As we get older and less able to play, we have to find different ways to stay engaged with the game. I'm always looking for good basketball books, so I thought I'd start a thread where folks can post up their favorites. Here are some of mine.

1. My favorite basketball book ever is Playing for Keeps by David Halberstam, which is about Michael Jordan. Halberstam is a big-time historian, and he provides a fantastic level of detail. The running theme of Playing for Keeps is that the cause, and price, of Jordan's success was basically a pathological need to win. This is not news, but there are some great stories around this theme, like when Jordan cheats at a game of Old Maid with his college roommate and his roommate's grandma. ("Did you just cheat my grandma in Old Maid?") The sections about Larry Bird and Isiah Thomas are also really fun to read.

2. Another good one is The Last Shot by Darcy Frey. This one follows the Lincoln High (Coney Island) basketball team around in the early 1990s, and focuses on the twisted process of college recruiting. A bratty 14-year old Stephon Marbury makes some extended cameo appearances, the first of which has him rolling into Coney Island's famous "Garden" basketball court on a Big Wheel.

3. I also loved The Last Season by Phil Jackson, mostly for the Kobe-Shaq gossip. Jackson does his best to handle the Bryant sex scandal delicately, but in reading between the lines, it looks to me like Jackson's saying: "I think Kobe raped her."


4. I'm right in the middle of The Jump by Ian O'Connor -- the new one about Sebastian Telfair. Telfair gets treated pretty gently (this is the price of total access), but the high school/NCAA/NBA exploitation machine does not. Some good Marbury-bashing in this one as well. I find it riveting.

I'd have to go with John Edgar Wideman's Hoop Roots. Wideman is an amazing novelist who happens to have played at Penn, maybe even on the '79 Final Four team (though I could be wrong about that).

I also liked Black Planet by David Shields, though I had some terribly well-formulated critique when I read that book that I can't remember at the moment. But the focus on race is essential.

Also worth checking out:

Oooh yeah, I liked Black Planet too. It got me obsessed with Payton for a while, and I agree, the discussion about race is as frank as you'll find.

Let's also add a new book. It doesn't come out until March 1, but I know the author. He's a native Tarheel, the son of a UNC prof., the former fiction editor at Esquire (I think) - this book promises to be sensational;

To Hate Like This Is to Be Happy Forever : A Thoroughly Obsessive, Intermittently Uplifting, and Occasionally Unbiased Account of the Duke-North Carolina Basketball Rivalry, by Will Blythe

I would also add A Sense of Where You Are by John McPhee, Life on the Run by Bill Bradley, and A Good Man by Bruce Jenkins.