One thing that aging ballers love to do is tell stories about famous players they've played with or against. When I was in college at Northeastern U. in Boston, there was a lot of reminiscing from the older players about Reggie Lewis, who allegedly used to dominate the pickup games at the gym. The best player I ever played with at NU was Wayne Turner (from Kentucky, and briefly, the NBA). He was a native Bostonian who would occasionally come to the gym and crush everyone. It's good to play with guys on that level once in a while, as it really puts you in your place basketball-wise. Turner was not just an amazing player; he actually seemed like a different species of human from the rest of us, able to do things that our bodies could not even conceive of, and capable of exploiting impossibly small gaps in the defense.

But my favorite famous-person-that-I've-played-with is Ira Glasser - the long-time director of the ACLU, now retired. Glasser was well known for playing in the pickup games at NYU, and I would see him at the gym all the time when I was procrastinating grad school work. He was friendly with everyone, and could always be found playing 3-on-3. He was/is actually a pretty good player, with a reliable set shot and keen passing skills. A truly dignified aging baller, he seemed to have adapted to the limitations of age and made full use of his remaining abilities. Seeing Glasser play, I always thought that I would want to be playing his kind of cerebral game when I reach my sixties.

Here is where you share your stories about famous people you've played with. You must say whether they were good or sucky. 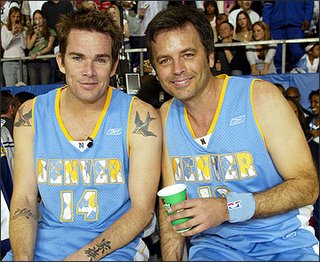 The most famous person I played ball with was Josh Hartnett in Minneapolis. My close friend was Josh's roommate in L.A. when both were struggling actors. I didn't know he was famous at the time that I was playing against him, but I recognized him when I saw Pearl Harbor and spazzed out, saying "thatz that dude I used to play ball with with Sam!!!". Now he's dating Scarlett Johanssen, surely impressing her with his above average for an actor guy post game...

A less famous person, but he was actually in the NBA at the time, was Scotty Brooks, the former PG for the Twolves and 76ers among others. The Twolves used to work out downtown in the Downtown raquet and swim club, where my dad was a member. You'd occasionally also see Thurl Bailey, Tod Murphy, and the other CBA players moonlighting as Timberwolved during their expansion years. I played a game of "A" (an abbreviated game of horse) against him. He won, of course, on a three pointer.

I would go to Club One at Oakland City Center with my girlriend, now wife, and see Mayor Jerry Brown taking set shots with a release point below the waist. I could tell he emjoyed really slow 3 on 3 games with women and in general just blending it and not being Mayor Moonbeam of the Court. I shot around with him but never really got into a game with him. I told my girlfriend to go up to him, block his set shot and scream, "Get that weak shit out of here, Mayor." She never took me up on it.

Living in Norman, Oklahoma for most of the past 17 years, give or take a couple, I've had the opportunity to frequently play against college-level, and, occasionally, D-1 level, competition.

Rec gyms at a major university, especially one with a firm athletic department, are ridiculous in regards to the level (top to bottom) of talent you'll find, simply playing intramural ball. But, be it football, cheerleading, or volleyball - all D-1 level athletes against whom I've played, nothing compares to actually playing against a truly good basketball player. It is humbling.

When I was about 19-20, before my first ACL injury, and while I was still at my maximum potential, athletically, my fraternity participated in a 3x3, full-court, with 9' rims street ball tournament sponsored by another fraternity.

Being that my fraternity is a smaller one, the host fraternity put their own team against mine.

But, as per their own rules, anyone can play. (In fact, in the 2nd round, we embarrassed a team from Stillwater, which felt nice.) My team consisted of myself, the backup kicker for my university's football team, and an NAIA-washout friend of mine who was waiting tables while working his way towards being a cop.

Except I had a handle that most people couldn't take, sometimes even on double-teams, the backup kicker was also a 6'4" all-state tight end in high school, in Texas, the year before, and the NAIA-washout washed out before he couldn't afford school anymore. He was still 6'3" with a 46" vertical though.

Neither of those guys played college basketball, but they were able to destroy some random intramural guys. I helped a little.

Then, in the 3rd round, we played a team, also from the host fraternity, consisting mainly of other football players from the university, including two who went on to play in the NFL.

None of them D1 basketball players, but all three of them D1 athletes at a major football school.

Suddenly, I had trouble bringing the ball up the court, even by myself, and those alley-oops that I was able to throw were either getting batted out of my hand like a blocked shot, or getting stolen short of the rim. My friends had similar, but not as rampant, problems.

We lost. We actually got back in it late when they started thinking they had it won and backing off of us, the 3pt line really opened up. We actually pulled to within 2 with about 30 seconds left. Then they inbounded the ball, made three passes, and had a layup at the other end. Ballgame.

OU - that is a great story!