Psychology: Dogs should stick to poker 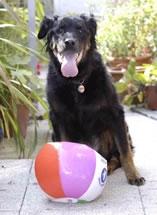 Do your sagging skills threaten your manhood? It could be worse as Ira Berkow writes in To the Hoop: The Seasons of a Basketball Life:

And that night I had a dream: a rottweiler was biting my ear. He and the owner were on the sidelines of a game at Sullivan High School in Chicago, where I had played as a teenager. I was without sneakers and in stocking feet. The owner said, "My dog will stop biting your ear if you promise not to play anymore....

Isaac Herschkopf, a Manhattan psychiatrist and fellow pickup basketball player, interpreted the dream for me:

"Your ears represent your testicles," Ike began. "You felt very emasculated on the basketball court. It was something you've been good at, and proud of, and you were playing with younger guys, and yet on this day were not able to compete to your satisfaction.

"Rottweilers and Doberman pinschers are known to go for the balls. The dream expresses your anxiety, but it does so in a such a manner that it doesn't wake you up because it disguises it.

"The only two pairs of organs that dangle from your body are your earlobes and your balls. The earlobes are wonderful symbolic representations of your testicles."
Posted by Drew Halfmann at 10/03/2005

This explains why my ears are so itchy, and why they don't like to be kicked.