Players: This cat can ball! 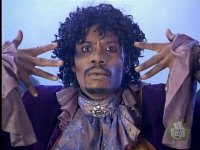 Check out Charlie Murphy (Eddie Murphy's brother) on the Dave Chappelle Show recounting the time that he played hoops with Prince--"How about you and your friends vs. me and the Revolution".

I laughed so hard I woke up my baby! Apparently, Prince played for Central High School in Minneapolis. Below is is an MTV interview with Prince that mentions the game with Murphy:


Sway: I wanted to tell you this story first: I was watching the Dave Chappelle show, and Eddie Murphy's brother Charlie Murphy does this thing on it called "True Life Hollywood Stories," and he told this story that he was hanging out with you at your house, and you guys were listening to music, and then you came up with the idea to all go play basketball. He said they didn't have any clothes, so you got them shorts and T-shirts, but he said that your crew showed up to the basketball court with the same wardrobe [as you wear onstage]. High heels, suited and booted. Is that true?

Prince: That part's not true. But the whupping's true.

Sway: The whupping's true. So you've got basketball skills?

Sway: Yeah? What you got? A crossover dribble? Or a jump shot?

Prince: We didn't call it crossover back then.

Sway: What'd you call it?

Sway: Just speed? So you played when you were younger? And you still play?

Prince: Sometimes. Not so much anymore.