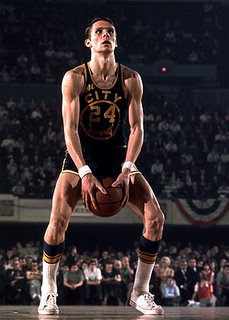 One day I asked Jeff if he thought it was possible for somebody my age to improve his game. "Definitely", he said. But I'd hit a plateau. I was playing and shooting regularly, but nothing really changed.

I showed him my one move--catching the ball on the wing then looping around the man guarding the point and down the lane. He showed me a couple of variations on the move including one that involved going to my left. When I confessed I didn't have a very strong left hand (he feigned surprise, but was probably just being polite), he suggested that I dribble with two balls every day.

It sounded like a great idea, but I've never done it. I'm just not the type of person to do drills of my own volition. Which is why adult basketball camps have caught my eye. There are some crazy expensive fantasy ones--including those by Darryl Dawkins, Coach K, Rick Barry, and Michael Jordan ($15,000; see the story in Sports Illustrated), but perhaps, the more promising (and less expensive) one for me is Never Too Late Basketball (see the story in the NY Times). They have ten-week courses in Boston, San Francisco and New York for $175. They also do weekend camps around the country.

Since I'd never really been coached, there were a lot of simple hoops skills and tricks that eluded me well into my 20s. When I was about 25, I had the same kind of "plateau" crisis that Old School is talking about, so I decided to go online and get help. There weren't as many coaching websites back then as there are now, but I found a few that showed me how to do shooting, rebounding, and ballhandling drills.

The best site was made by a 14-year-old girl named Steph. She had these little movies of her doing dribbling drills in her driveway - figure 8, the spider, two balls at once, etc. It was all really charming actually. You'd see her doing this drill and her little brother would roll across the background on his Big Wheel. But I learned all the drills and my handle got much much better.

Now I've reached another plateau, though this one is due more to my busy life and deteriorating body more than anything else. Maybe I should go to one of these camps to see if I'm maxed out.