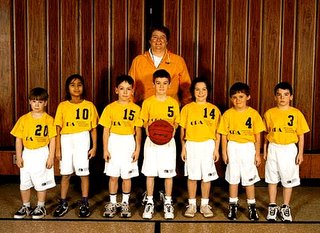 Well, Old School and I have been pretty bad about posting lately. I think that this has in part been due to life responsibilities (our jobs, Old School's baby boy, my upcoming nuptuals), and also due to injuries that have been keeping us off the court (Old School: knee, me: ankle).

So we've invited some of our most devoted commenters to write posts for the site. Please welcome Cary, Juice and Mothy to our editorial ranks. Ben has also been added, though he is not sure if he will post. Let's hope he does!

Cary (aka DJ Cary aka the Kuma) grew up on the mean streets of St. Louis Park Minnesota, where he spent nights perfecting his behind the back pass, slow crossover dribble, and left-handed fade away jumpshot on the hallowed grounds of the Minneapolis JCC and his neighbor Barry Miller’s slightly bent garage door hoop. Rumor has it that his vertical exceeded 23 centimeters on occasion, and that he could school anyone in the ‘hood in Double Dribble. Taking his game to the streets of New York City, he quickly became a playground legend at storied courts like Bergen St. in Brooklyn, the low-ceilinged and high-flying Hamilton Madison House in Chinatown, Cardinal Spellman High School, and the 2nd Avenue courts on Manhattan’s Lower East Side, where he dominated the B-court filled with hung-over hipsters wearing knee high tube socks and vintage T-shirts for years. In 2004, Mayor Michael Bloomberg officially renamed the bench on the east side of the 2nd Avenue courts the “DJ Cary Honorary Bench” to pay tribute to his many hours spent hacking playground greats like Jeff, Juice and Ben.

Juice began playing basketball regularly at the ripe old age of 18, on the hallowed concrete courts of the University of Wisconsin's southeast dorms. He became known as "Whiplash," thanks to the frequent snapping back of his neck as he watched his two-handed, from-the-chest jump shots get swatted into the next ZIP code. This indignity led him to develop a one-handed jump shot ranked between Shawn Marion's and Patrick Ewing's in Slam magazine's annual "100 Ugliest Jump Shots" poll. Juice now resides in Brooklyn, New York, where he silently watches teens on the local courts fly through the air with grace and skill while a lone tear descends his cheek, pauses at his chin, and plummets, like his hoops-playing dreams, to the ground below.

Mothy (aka Vanilla Blur aka Vanilla Blob) grew up a Hoosier by birth, but a Wildcat Fan by the Grace of God. Embarrassed by his self-perceived boney knees in early childhood, he tried to conceal them behind thigh-high tube socks kept up with flooring-installer knee-pads through his 21st birthday. His dry wit rubbed his high school coaches the wrong way, and his hoops handle did not flower until his matriculation at UCONN where his intramural claim-to-fame was hanging on the rim at any and every opportunity. Just prior to his marriage to a track jock(tress)
in 1997, Mothy breakaway dunked twice in a game on a [springy] second-storey Methodist church court in Fort Worth, Texas. Post-marriage, he is 0-for-397 on breakaway dunks, but his wily game and deceptive, flat-footed defensive posture was a staple at the University of Texas and on Austin's Pease Park and Fire Station Courts through 2001, before he relocated his Church of the Hardwood to NC State University. After adding another $65K in education debt to his kitty in North Carolina, Mothy recently moved his Hoops Congregation to Manchester, New Hampshire, where the jury is still out on how well hoops can be played with parkas, moon boots, and lumbering meese (?).

Glad to see you're on board with what is still one of my favorite sites. Let's hope it remains so after a few of your posts! Actually, I'm sure it will, given the steady quality of the old SMH site.

I'm now playing in - of all humiliations -a regular faculty game here at Valpo, but at least it's a hoops school in a hoops state, so the level of play is not half bad. Haven't seen a breakaway dunk yet, though.

Schayes, aka The Vanilla Gorilla, aka Matt@Valpo