Race: "Such a natural team leader..." 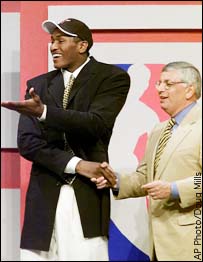 The other day at the gym I overheard a conversation about lilly-white Duke guard J.J. Redick, where a Caucasian man remarked that "...even though Redick is slow and can't dribble, (blah blah college team) tried everything to stop his 3-point shot, and they even put an athletic black guard on him, nobody could stop him...". After cringing, it brought up a lot of questions in my mind about the language of sports fans and journalism.

Among fans, even among well-meaning fans and commentators who mean no harm, there are a lot of troublesome examples of coded language in sports coverage, especially with the rise of ESPN, 24 hour sports business coverage from white guys in Armani suits, stats sports tickers, and most notably, fantasy sports, where everyday people simulate ownership of sports players and act as a fantasy GM of a sports team managing a fantasy roster of mostly black players.

White players coming into the league are almost invariably compared to Bird, regardless of their game. Yahoo!’s fantasy sports page features "The Big Board"” ranking players from 1-50 based on their statistical performance, mostly African-American players reduced to pure commodities ranked and evaluated somewhat like slaves on an auction block. In some fantasy sports leagues, players are drafted by auction, where owners ‘bid’ for the right to own the statistical production of athletes. When most of these athletes are African-American, is this a modern-day virtual slave auction going on?

In a recent conversation with Jeff, I was particularly critical of Ron Artest, whose recent shenanigans seriously damaged what could have been a very dangerous Indiana Pacers team. Jeff pointed out rightly that out that while Artest's actions breaking team rules by publicly demanding a trade and betraying his team were deplorable, it is common to hear the silent but racist language that insists that African-American athletes like Artest should shut up and be grateful for the huge piece of the pie they are given, even though it pales in comparison to that enormous reserves of almost exclusively Caucasian team owners who profit enormously from the labor of these athletes.

NBA players like Rasheed Wallace and Jermaine O' Neal have made attempts to publicly compare their situation to the situation of very well paid slaves and commodities, and the NBA, led by David Stern, has put the clamps down quickly on the dialogue. The NBA's recent dress code certainly smacks of trying to “whiten up the league" a bit. Phil Jackson, in his book The Last Season also quipped about Wallace that someone being paid $17 million dollars a year to play basketball and stay in four-star hotels has little basis to complain about being treated like a slave.

What are some other examples of racist codes in sports? Are the actions of African-American athletes problematized more than their Caucasian team owners in media? Are fantasy sports lovers unwittingly corroborating in a virtual dialogue revolving around racist notions of ownership? Is the notion of team really deteriorating in sports? Or is that just another code to justify playa hating African-American NBA stars who can do what normal slobs in offices can't?

basketball is really less about speed than it is about quickness. it's a mistake to think that reddick is unathletic. he is very quick, with fairly good speed and jumping ability. he reminds me of a slower kirk hinrich but a better shooter. and anyways, athleticism means nothing if you can't control it and be able to execute skills while using it. reddick is a remarkable athlete in that he is quick, has a quick release, a deadeye shot, AND can execute all of these things throughout the game--which is a testament to his conditioning.

with that said, the nba is a completely different world. hinrich was a remarkable athlete in the college game--did you see that double-clutch flush he threw down at the end of the championship game with 'cuse?--but he is an average guard athletically in the nba. like hinrich, reddick will be a pg in the nba, a scoring pg, but a pg. he can't hang with all-world athletes like kobe, t-mac, lebron, et al.

but on the real topic of the post... we racialize the game. we racialize everything in america. it is the burden we as americans bear. the reap of what we sowed. you mentioned artest... we love artest at globetrotter, we have no shame in that. but i'll even go another step further and say he was entitled to demand a trade. players demand trades all the time, should it matter if its behind closed doors? how inadvertantly brilliant is it that he actually got his trade? behind closed doors, it might never have happened. we throw around words like "loyalty" and "team-first attitude" but these words are rendered meaningless by the nature of the biz. organizations demand team ideology from their players but then execute undemanded trades behind players backs--like ricky davis, who was perfectly happy in boston--and sometimes not even bother to call them and tell them about it. they write this off as "business" and expect that their players understand that it's just "business." so when players like artest demand a trade, where's the "business"-like understanding? this isn't so much racist language as imperialist. but they go hand in hand.

thanks for the comment....actually I challenged the dude's assertion that Reddick was slow (slow being one of those code words), but to no avail. I think anyone that can create their own shot can't be that slow.

I also wanted to bring up the imperialism issue, and actually one counter argument is that everyone, regardless of race, from Jerry Buss on down to the towel boy on the Celtics, is subsumed in the capitalist game as a commodity and using whatever leverage they have to improve their situation.

I only mentioned Artest because I think was an example of a situation where maybe I was being too hard on someone--after all, I don't know Ron Artest personally--and that I needed to check myself. Jeff's point that was well taken was that people focus more on athletes because they do superhuman physical things, but there are probably much more selfish things going on on a daily basis at the front office level.

Jackson's book "The Final Season" is very telling in terms of how even very well meaning white people, and I think Jackson is very well meaning, often cross the line into paternalism. He picks on Rasheed a lot, but mentions that "he behaved himself" in Detroit.

It's kind of a catch 22-when someone like duncan dominates the media gripes because it's not sexy enough. But then if Iverson leads his team to the finals they bring up the normal litany of coded criticism (flashy/selfish/tatoos/thugged out/etc.), and start pining for the good old days....

The slave auction comparison just doesn't wash for me. It makes light of the real horrors of slavery for one. But also, he must recognize that even if we but aside that vast sums of money (a BIG if) NBA players have more control over their careers than most American workers. It just doesn't make any sense.

But this is not to dismiss the reality of coded language about race, and indeed racism, throughout sports. Questions about leadership, as you mention, about intelligence, about violence, about ways of relating to authority, all get inflected with race.

thanks for the reply.

Just to clarify, I wasn't trying to make an analogy between the present situations of NBA players and those of slaves, which would have, as you suggested, been rather ludicrous.

I think I was trying to call into attention the troubling dynamic of a room full of white dudes simulating ownership of a group of people that is predominantly African-American, 'bidding' on players, and the language of ownership that goes on in sports coverage and fantasy sports that does carry a lot of baggage along with it. A lot of times in fantasy sports you see notes about players saying things like "Antonio Davis owners should sit him now that he's in Toronto". You also see notes that say things like "Amare Stoudemire is a 5 tool fantasy stud", that opens up the question of the coded sexual dynamic at play.

Another thing that always gets me is when announcers and fans use the indefinite article 'a' in front of players names. "Would you trade, say, a Ron Artest for a Corey Maggette?", kind of suggesting that these players aren't really humans but variables in a mathematical equation. Again, capitalism...

It was not unheard of for slaves of particularly good physical shape to be treated better than others, whether that was to keep them in good to shape to keep them working, to keep up their future (trade) value, to keep their value as breeders. Then there where those whose sporting (fisticuffs, for instance) accumen provided them a place of comfort that the common laborers didn't get.