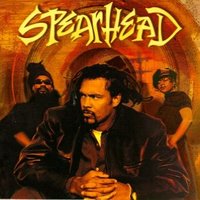 The other day I was hooked up to my ipod and doing the elliptical trainer dance at the local Y when endorphins caused me to wonder what the best basketball songs are. The only songs that came to mind were the Michigan State fight song and Spearhead's "Why O Why" from Chocolate Supa Highway. I always liked that song because one line made me imagine that it was about Bergen St. in downtown Brooklyn where a bunch of us used to play--"all day to be more specific, east to west from Atlantic to Pacific". I just found out that Michael Franti (who is 6'6") played for the University of San Francisco Dons. I'd like to see him take on Prince. Other favorite songs?

Do you remember runnin' the court in September
me and my homies be down for whoever
would come along and try to send us to the showers
from the game that we'd been dominating' there for hours
all day to be more specific
east to west from Atlantic to Pacific
fools would come round to get down
and try to take our crown
but we would hold our ground and we would never back down
old timers new timers would get in line there
and take a seat there and try to prepare
but oh no! there was no chance when we was in the zone
we was alone at the top we had hops we got props
and when we needed to we busted chops
wipe the court with your game like we was using mops
whatever happened to the super hoopers
in the park I reminisce while shootin' solitary after dark

Brother C came fresh from out of town and
he had handles and like McDonald's he could clown ya
dribbling baby bounces between drinking forty ounces
knock ya on your heels and do circles like he was Curly Neal
but oh no, the liquor got quicker to his head and he said
"I think I musta placed some stupid bets"
he hit me up for some cash there was a car crash
a splash and then the brother made a mad dash
Rob oh Rob his whole life was like a roller coaster
but on the court he looked like a Dr. J poster
flying high with an Afro blowing in the wind
wiping Windex, index finger rolls
off the glass then swish through the net
jump a Corvette with a triple pirouette
but off the court he had a few temptations
copulations no moderations by 24 he had 3 pregnations
last check crack intoxications
so many other brothers gone from this dimension
and none of those who got hurt receive a pension
give a Bup! Bup! to those locked up in detention
memories too many dimension
and we say, one more time...one more time

From the Beastie Boys' "Tough Guy":

Butcher me on the court
Too many elbows to report
Now you're poking me in the eye
Bill Laimbeer motherfucker, it's time for you to die

There's a Marvin Gaye song called "You Sure Love to Ball," but I get the sense from the lyrics that it might not be about basketball.

Well, I think we should start with the most obvious one, entitled "Basketball" by Kurtis Blow.

Basketball is my favorite sport
I like the way they dribble up and down the court
Just like I'm the King on the microphone so is Dr. J and Moses Malone
I like Slam dunks take me to the hoop
My favorite play is the alley oop
I like the pick-and-roll, I like the give-and-go,
Cause it's Basketball, uh, Mister Kurtis Blow,

I used to go to dinner, and then take the girl,
To see Tiny play against Earl The Pearl,
And Wilt, Big O, and Jerry West,
To play Basketball at it's very best,
Basketball has always been my thing,
I like Magic, Bird, and Bernard King,
And number 33, my man Kareem,
Is the center on my starting team,

(To the hoop, ya'll, Watch out, Watch out
In yo' face, now here comes the rest)

Clyde, Rick Barry, and Pistol Pete,
Now these players, could never be beat,
Isiah, and Iceman too,
Just give 'em the ball, and then you talk up too,
Dantley and Wilkins are on the scene,
And Ralph Sampson is really mean,
Bill Russell didn't take no junk,
and Darryl Dawkins got a monster dunk,
Tell me, were you in the joint?,
The night Wilt scored 100 points,
Or when Celtics won titles back-to-back,
And didn't give nobody, no kind of slack,
Or when Dr. J shook the whole damn team,
With moves that came right out of a dream,
Or when, Willis Reed stood so tall,
Playing D with desire, it's Basketball,

And did anyone see Ralph Samson got brought up on charges of not paying child support to several different women?

I wonder what NBA player leads the league baby's mamas? that would be a good topic.

And Ed Hidalgo is one of my blog names by the way. I was trying to hack into the Minnesota Timberwolves' records yesterday to get them to make that Sczerbzizcziak for Artest deal.

"Now who's the first pick? Me, word is born and
Not a Christian Laettner, not Alonzo Mourning
That's okay, not being bragadocious
Supercalifragelistic, Shaq is alidocious"

that one was hype. I remember the video for that song too. Shaq had an Elmer fudd hunter's cap on I believe.

There's a CD/cassette I think from '91 or so that had raps from the likes of NBA legends like Brian Shaw, Cedric Ceballos (who is said to be a good rapper), and Dennis Scott, who I think had a tattoo of himself on his right arm. Anyways, here's a URL if anyone wants to investigate.

Michael Franti had an even better basketball song from the album 'Home' which was 'Dream Team'. He starts singing about the 92 Dream Team and then moves into his all time Dream Team (about music and human rights activists).