NBA: Save the Knickerbockers 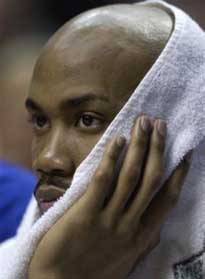 Man, what's going on with the Knicks? It was only a few years ago that they were an intimidating defensive stalwart holding opponents to low scores and thugging their way to the top of the Atlantic Division. Last night their new vaunted backcourt of Marbury and Stevie Franchise gave up 46 points to Gilbert Arenas....in 3 quarters! Although I've never been a huge Knicks fan, I do pine for the days when they were a force in the east, and their rivalries with Miami and Indiana made the NBA fun to watch. That organization is a mess, and most people are pointing fingers at Isiah Thomas and the Knicks top brass. My question to my fellow Setshotters is if you were the GM of the Knicks, how would you start to clean up the mess...

...given that many of the squads draft picks have been mortgaged away, and high-rent, long-term contracts for players like Jerome James are keeping you at the salary cap limit. To make matters worse, New York fans and media are too impatient to rebuild, thus perpetuating the cycle of trading away your future players for overpriced aging talent. Where do you begin? And I wonder if somehow we can get Woody or Soon Yi to chime in on this one? Should the Knicks turn to the IMF for help? 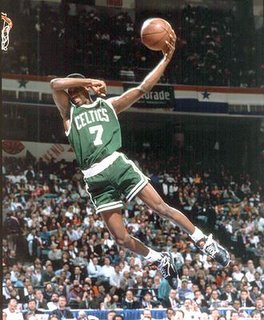 Let's face it. NBA All-Star weekend has gotten pretty boring. That skills thing is silly, and the dunk contest has basically become an excuse to show candid shots of P-Diddy, AI, and Dirk clowning around for an hour with Eva Longoria looking impressed on the sideline. It seems like it's time to gets some new, creative events out there for All-Star weekend.

Jeff suggested the excellent idea of a game of horse between NBA stars, although in his typical modesty he attributed the idea to someone else. I think maybe a 2-on-2 game featuring teammates might be fun to watch. I would like to see what our readers think would be some good new events to liven things up... 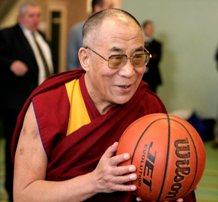 UConn hoops fanatic and friend of Setshot Suzanne referred us to this organization. "Playing for Peace" is a non-profit agency that bridges social divides, develops future leaders, and educates kids through basketball. Their modus operandi appears to be getting kids from opposing social and political groups to play ball together: white kids and black kids in South Africa, Catholics and Protestants in Northern Ireland, Israelis and Palestinians in the Middle East.

It looks like they're getting some good publicity. Steve Kerr is an advocate, and the Dalai Lama (pictured) is reported to have been breaking ankles and backboards at a recent exhibition, earning the streetball nicknames "Monky Business" and "Transcendental Conflagration." (Ok, I made those up.)

Playing for Peace has a bunch of interesting-looking job opportunities at its various sites. It could be a good way for the aging baller to prolong his involvement in the game while doing good in the world. 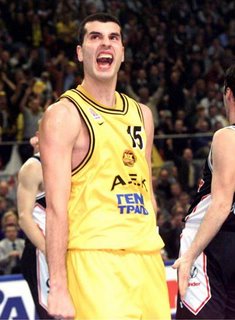 After several months of being on the shelf with plantar fascitis, I finally played some three on three pickup ball at USF's Koret Center. I don't know what happened. My team won several games in a row, despite our obvious physical shortcomings--both my teammates were well over 50, all of us were balding, and two of us were under 5'8. The guy guarding me, a bratty looking undergrad who saw me hobbling and wasn't taking me seriously at all, started talking smack and challenging me to shoot, which I did...

...I hit about 4 in a row, slicing through the lane like a slow, gimpy Steve Nash, later dishing to open shooters for treys or scoring on dribble penetrations and once on a hop-step move. I even knocked down some treys in the dude's face directly after he had been challenging me. I wanted to shout "whaaaaaaaat!!!!!!" but fortunately reason got the better of me. Maybe it was just the fun of playing for the first time in so long now that every game might be my last, but it was one my greatest pickup hoops moments of all time.

I now ask the good members of Setshot a simple question: What are some of your greatest moments playing pickup ball?

Video games: What to do when injured 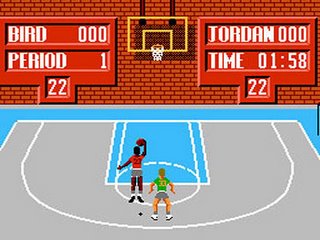 The last several months I've been on the DL from playing basketball due to plantar's fascitis. Unfortunately the only way to get my hoops fix has been from offering up lousy trades in fantasy sports and more importantly, bball video games. It leads to the natural topic for my fellow setshotters: What are the best hoops video games of all time?

My vote would go to NBA Jams, which cemented the phrase "he's on fire" into NBA lexicon forever as players like Jeff Hornacek and Charles Oakley did 720 dunks after making several shots in a row. Justin and I once had a good season of NBA 2K3 where I was inexplicably able to score 23 a game with Celtics reserve Eric Williams. Double Dribble was the best game for the Nintendo, even though there were certain spots on the floor where players would shoot 100% from 3-point land.

There's a couple of games that were fantastic in their day that get slept on: Arch Rivals, the original Atari video game that featured two stick figures walking back and forth and shooting on a two dimensional straight line representing the "hoop", and of course the classic Jordan vs. Bird, where an irate Janitor would come clean the floor and admonish MJ or Larry after shattering the backboard with a ferocious dunk.

Fellow Setshotters, what are your favorite hoops video games, and why?
Posted by CJB at 2/04/2006 5 comments: