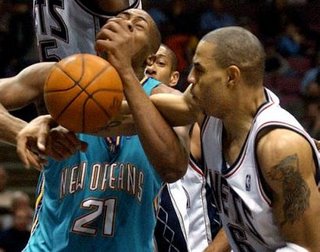 Admittedly or not, each of us has some cheap tricks on the basketball court. A week ago I ran in a full court game where I had the misfortune of playing against this guy--more than likely some kind of triathlete--whose game was basically predicated on sprinting down the court after every made basket before the defense could get back, and cherry picking easy layups all evening. It was kind of legit, but pretty annoying all in all. Since the guy on my team assigned to guard him basically took the night off on D, I was left with the unenviable task of running wind sprints all night to prevent this.

As we advance in age, we need to make up for our lack of athleticism by doing whatever possible to get an edge. Jeff has devised an unstoppable move of simply turning around and around again until you finally bite on a head fake that allows him to shoot an easy layup. I like to grab jerseys and throw some 'bows every so often after grabbing rebounds, and sometimes my forearms do the talking when I get beat to the spot. So I ask fellow setshotters: What are the best (or worst) cheap gimmick moves you've seen people use to fight off the effects of diminishing athletic skills?