"Worse than he thinks": Self-image versus ability 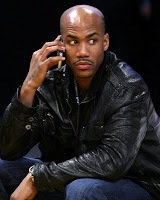 I recently wrote about appearance versus ability—specifically, about players who are "better than they look" and those who are "worse than they look." Another important issue, and one that is a source of endless frustration to thinking ballers everywhere, is self-image versus ability. To me, the worst players to run with (aside from the belligerent and insane) are those with drastically inflated self-images. You know these players. They're the ones who think that they're the best on the court, the ones who think they know how the game should be played and how you should be playing it.

There are a lot of things to despise about these types. They often tend to ballhog. They "coach" a lot, telling others what to do and where to go. The construct completely distorted histories of games and their roles in those games, rarely blaming themselves for losses but almost always overstating their contributions to victories. But what I hate most about these players is that there is nothing you can do to make them understand the lunacy of their perceptions. There is no such thing as constructive criticism. In fact, there is no place for criticism at all, unless they are criticizing you. After playing with a worse-than-he-thinks player, one is invariably frustrated. You know, and others know, that worse-than-he-thinks is indeed, worse than he thinks, but there is nothing you can do to make him grasp that. Ignorance might be bliss for him, but certainly not for us.

In my experience, worse-than-they-think players tend to overfocus on their good skills and ignore their weaknesses. Such a player might be a good jumpshooter, and ramble on incessently about this shooting prowess, but never acknowledge that he fails to effectively rebound, defend or pass. When his ballhogging costs his team the game, worse-than-he-thinks will chastise his teammates for failing to hit shots, rebound, defend or pass. Argh.

There is an older guy in my current run that is the epitome of this type. I really don't like him, nor do the other thinking players at the gym. Last night, he was on a very good team and spent a lot of time puffing his chest out and acting like he was the king of the court. The truth was that his teammates were carrying the load and all he was doing was yapping like a miniature dog. When my team played his team, I was forced to guard a strong, highly skilled player. On one play, worse-than-he-thinks set a screen for my man, who hit a long, contested three (I managed to get over, but a little too late, and my man hit a good shot.) Coming back down the court, worse-than-he-thinks sidled up next to me and exclaimed, "THAT WAS A BIG PICK RIGHT THERE," as if he was the one who deserved credit for the shot. I wanted to smack him in the mouth.

Here again, the words of Obama brother-in-law Craig Robinson echo in my mind: "You can tell a lot about a guy by the way he plays basketball. You can tell if a guy is selfish. You can tell if a guy is phony. There's a lot of different ways on the court you can tell that." My view is that the on-court personality issues of worse-than-they-think players seem to be exhibited off the court as well. Whenever I encounter one of these self-absorbed douchebags in real life, they turn out to be, well, self-absorbed douchebags.

Any advice on dealing with these types?