Tips: How to shoot a set shot 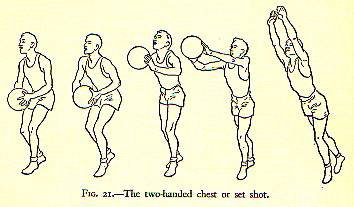 We named this site "setshot" to reflect the repertoire of the player that's just too old and broken down to jump or drive the lane anymore. For me, the name also conjures up my dad and his old-fashioned moves. And that conjures up an era when the set shot dominated basketball. Jeff and I don't go back that far, of course, (we're aging, not old) but the game has changed in many ways since our childhood. So, to celebrate our diminishing abilities and our years of hoops love, I offer you a mini-clinic on the set shot. 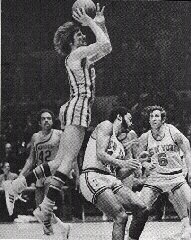 In seventh grade, I felt honored when my coach chose me to read an article on the set shot by Pistol Pete Maravich and then teach my fellow players how to do it. I only realized later that this was his subtle way of correcting my unorthodox elbow-akimbo shooting style.
An inspiration to aging hoopsters, Maravich died on the court at age 40. After, a pick up game with Focus on the Family's James Dobson, he said, "Let's do this again, I feel great." He then collapsed and died of a heart attack. 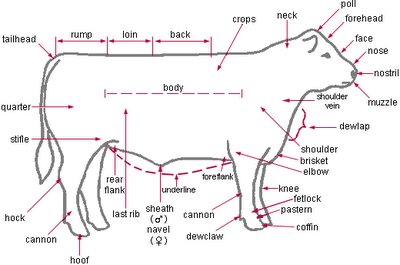 Back to the set shot, first, don't shoot like the old-timer at the top of the page--his form looks terrible--he's shooting with both hands and leaning forward crazily as he takes the shot. Second, you could try the BEEF method. Jason Rogers suggests that the coach should have some beef on hand for the lesson "or something that looks like beef (a large picture of a cow would be a good prop!)". After showing the prop, the coach should initiate a discussion about beef. "Ask students if they think that "beef" has anything to do with basketball? Anything to do with shooting a set shot? (The answer should be "no")." The coach then asks the students to list all the elements of a good set shot on the bulletin board. The coach then singles out the four responses that spell BEEF--Balance, Eyes, Elbow, and Follow-through. If only my coach had brought some beef to the gym--my stomach wouldn't have grumbled so much during wind sprints and I'd hold the NBA three-point title--though three-pointers didn't exist back then.

Coaches Clipboard has a very good page on the set shot. I especially like the Form Shooting drill that they show in the video clip.

Start with shots directly in front of the basket, just a few feet away, to develop correct technique. Shooting further away does not allow the shooter to focus on this repeatable form. Do this drill for just 5 minutes every day. Even experienced good shooters who are going through a "shooting slump" find this drill helpful in restoring their shooting mechanics and confidence. 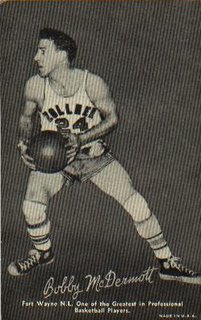 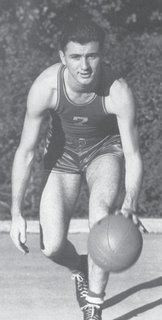 Finally, 81-year-old Ken Lindsay's excellent Guide to Coaching Basketball also has a good page on shots of all types (and many other things), including the two-handed set shot--"This shot is hardly used by modern-day players; however, Bob McDermott, the best shooter I ever saw used it with great success. Therefore, it is described here because I feel it is the most accurate shot from long range." McDermott, who played in the 1930s and 1940s with the Fort Wayne Zollner Pistons, could hit reliably from anywhere inside half court--a skill he used to spread the zone offenses of his time. The one-handed set shot and the running one-handed shot were invented around the same time by Hank Luisetti of Stanford and then the Phillips 66ers and St. Mary’s Pre-Flight of the AAU (the ubiquity of the set shot evidently prevented them from calling themselves "Air" anything). Luisetti was named the second best player of the first half century behind George Mikan.

The one thing you should always be careful about is the position of the legs. The foot that is under your shooting hand be slightly in front of the opposite foot, so someone that is shooting with right hand should have right leg in front of the left one.