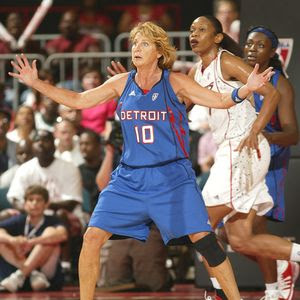 Our friend and fellow aging baller Ali directed us to this story about women's basketball legend Nancy Lieberman being signed to a seven-day contract with the WNBA's Detroit Shock. Lieberman—who has already been inducted into the Basketball Hall of Fame (in 1996!)—returns to play at the ripe old age of 50. In her "first" game with Detroit, Lieberman recorded zero points, two assists and two turnovers in nine minutes of action.

Wow! While Setshot has previously drooled over expressed admiration for Iowa's "Granny Basketball League," Lieberman has taken old lady hoops to the next level. Whether you care about women's basketball or not, this story is an inspiration.