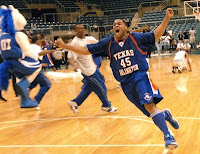 Your reaction was very much in the moment and did not continue after the initial outburst, right? I think that's pretty normal and I'll bet Surly McSurlison went home thinking more about his lack of D than your relatively non-hostile reaction. It's good to be sportsmanlike and all, but as long as you weren't up in football player's face (which wouldn't be smart anyway) I think it's nothing to be ashamed of.

I don't think you did anything dishonorable, especially given the type of player you were describing (I personally get really fired up playing against physical crybabies who call every touch foul but hack away at you and whine when you call it).

However, I am reminded of a high school football coach who said, "Act like you've been there before" when lecturing against celebration. I think it is more demoralizing to opponents to let your play do the talking and act nonplussed after sticking the dagger in - it says without saying it "yep, I've been doing that for years and I will do it again next time."