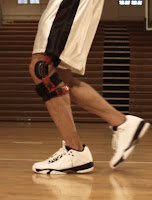 Well, look at it this way: first day back after a lay-off due to a serious injury, knee brace or not, I'm sure would have been accompanied with similar anxieties and doubts.
At least it sounds like you've figured out how to just "play", for the love of the game, instead of for the love of kicking butts :) Props for that!!!!

We provide you sports picks for free and you may check them out whenever you wish to learn the effective and latest tips to win a particular betting game.

Well, go my MRI results back today (finally opted for private out-of-pocket intervention, as public was taking too long)...

The good news is, I'm not a puss; thought that the level of pain I'd felt was off the chart, and then wondered if I hadn't just gotten "softer" with age...

The bad news is: complete ACL and meniscal (lateral and medial) tears!!!!

The worst part of course is that everything I've worked on over the last two months, I'll have to work on again, after the surgery, whenever that ends up being?!?!?! Of course, I know that this rehab was necessary, regardless... Just wish I was still a college athlete, with instant access to surgery, so the whole process would only involve one phase of rehab!!!!!

Hopefully, my wife (a physio) can pull some strings for me. She definitely could with one surgeon (who doesn't come as highly recommended unfortunately, especially considering the extent of my injury), but the 2 or 3 best surgeons, as you would expect, have a very long waiting list...

Ah well... Maybe it's time to live vicariously through my 3-year old son??? At least for the time being...