Could you score on an NBA player? A quasi-empirical test 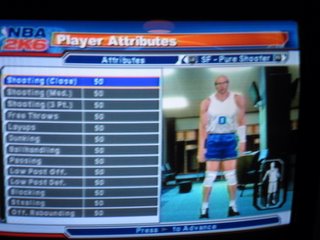 A few months ago I wrote a post wondering whether an ordinary pickup basketball player could score against an NBA player if the pro was playing his absolute hardest. This post generated a fair amount of conversation, with most respondents thinking that they could not score.

Cary and I decided to explore this issue using the latest in basketball simulation technology: NBA2K6 for Playstation 2. We created a character called Joe Setshot -- a 5'8" small forward with knee pads, Stockton shorts and male pattern baldness. Setshot was given the lowest possible rating in every skill category (50), so as to best approximate the abilities of an average player.

Cary and I then conducted a totally unscientific test of the "Could you score?" hypothesis. We made Joe Setshot play one-on-one against three NBA players: Wang ZhiZhi, Paul Shirley, and Kobe Bryant, alternating users in an attempt to control for video gaming skill. Would our man be able to get a bucket? Results after the jump.

The first match was Setshot versus Wang ZhiZhi, whose player rating of 63 is among the lowest in NBA2K6. We played winners' outs. Results, with user in parentheses:

It was impossible for our man to stop Wang. The pro was too strong and too fast. As soon as Wang got the ball and started moving toward the hoop, Setshot would be bumped backwards until he was forced out of position, and the towering Chinaman would lay it in. I did manage to score one point during my turn as Setshot, but this happened because Cary/Wang turned his back on defense and I was able to get an open layup. It's important to note here that I have owned this game for about a month, and while Cary is an experienced video hoops player, it was his first time playing this particular game on this particular system. Even with this skill disparity, the match was obviously quite lopsided.

Our second series put Setshot against Paul Shirley, who is the lowest rated player in the game (53). Results:

Again, Setshot was completely unable to stop Shirley, with the pro hitting a variety of layups and short jumpers to control the game. However, Cary got distracted for a minute and I was able to score four points in succession during my turn as Setshot. As soon as Cary pulled it together though, Setshot was shut down and Shirley cruised to victory. Remember again that this was Cary's first time playing the game.

Finally, just for fun, we made Setshot play against an NBA star, choosing Kobe Bryant. Results:

As Bryant, Cary went into a Non-Persistent Vegetative State and allowed me to score four times in a row, but basically, it was all Kobe. He threw down an array of awesome dunks -- their sheer force often knocking our man clear off the court. Bryant also hit a variety of difficult jumpers and fadeaways, taking great pleasure in toying with his lesser opponent. Hilariously, the game's AI made Setshot talk trash throughout the contest, even asking "Is that all you got?" as Bryant flushed the game-winning dunk in his face.

So what can we conclude from this? I think the experiment was slightly corrupted by a discrepancy in user skill that allowed me to score a few times as Setshot. However, in general, it seemed clear that with the pro user defending competently, it was impossible for Setshot to get a clean shot off. And as soon as the pro got possession, the game was over. Furthermore, the Joe Setshot character was probably significantly better than the average pickup player. We set his skill level at the bare minimum, but my impression was that the average player would still be much worse. (Note to video game companies: Let the skill ratings go down to zero.)

I'll stand by my assertion that the typical pickup baller could not score on a pro if the pro was playing his hardest. However, I invite others to improve on our methodological design and contribute to this important area of scholarship. 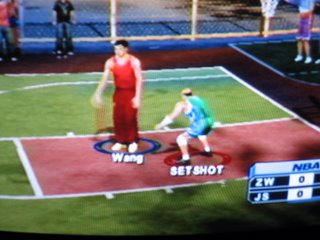 After Jeff's initial posting about scoring on an NBA player, I took quite a drubbing on Setshot after claiming that it might be possible to score on a doofy NBA big man, with most respondants claiming that it was completely out of the question. I also claimed that I could possibly hit .020 in the majors, a claim that was heavily challenged by Ben, Justin, and other sports pundits.

My fundamental contention is that after all, some NBA players such as Randy Breuer, Paul Mokeski, Manute Bol, et al, seem to be people endowed with only the physical abilities of normal human beings, except they are 7'3. They have one job, which is to block shots and draw fouls against Shaq. So my contention was that it might be possible to score on such a person simply by running as far as you could from them and then chucking up a three point shot that might get lucky.

After Jeff and I's experiment, I think I may have been sold that it's completely impossible. As Joe Setshot, as Jeff indicated, I was completely paralyzed on defense and unable to stop such indomitable forces as Wang Zhi Zhi and Paul Shirley even from getting a step on me. Too big and too strong. Once they get a step, its an easy dunk, so you can do the math. 0% chance.

But the debate was could you score? As far as our PS2 experiment goes, Joe Setshot (when played by Jeff) was actually able on several occasions to run alongside Kobe Bryant, and get shots off against him. This may have been due to my own incompetence at playing the game--it was my first time playing and I had had a brew or two during the experiment--but Both Jeff and I concluded that Joe Setshot was way too good, even with his levels set to the lowest possible settings. (NOTE TO VIDEO GAME DESIGNERS: MAKE THE SETTINGS GO DOWN TO 0 PLEASE.)

It became obvious that in real life, Kobe Bryant or any decent NBA defender (or even college level player) would swipe the ball from you before you were even able to put in on the floor or maneuver one way or the other. One thing I want to reiterate is I think "smaller" NBA players, even ones with normal height such as Nate Robinson or Earl Boykins, would have the ball in their hands within milliseconds, using their overwhelming strength and speed. Your only chance would be against someone "clumsier" like DeSagana Diop or Mokeski.

In conclusion, I think I may have been swayed towards the impossibility of scoring on an NBA player if he was trying his hardest, but since Joe Setshot's abilities were too good relative to the NBA players simulated in 2K6, the experiment will have to be performed again with a more realistic depiction of an everyday baller.

Also, I think in real life if Joe Setshot had lipped off to Kobe like he does in 2K6 after getting dunked on, he and the entire crowd at West 4th (where we simmed the game) would probably have laughed him off the court and had him hightailing it down 6th avenue in shame.

i dunno if the average pick-up gamer could score on an average NBA player, but there are definitely a lot of guys in the NBA that should NOT be there...i've seen guys play D3 college ball that are way more talented than most NBA players.

i know a lot of NBA teams are lookin' for role players...but still, look at the talent out there

And you're anonymous. Go away.