Courts: Can you feel the vibe? 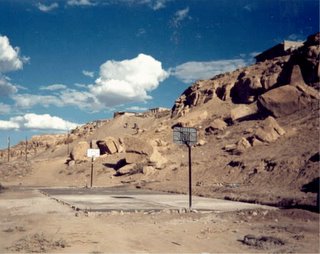 Lately, the outdoor basketball scene in Berkeley has been really crappy. Since I'm a total hoops addict, I'll go out searching for a game and basically settle for anything. Which has got me thinking about courts' different vibes.

I went to Live Oak the other night with Pete and the Ivory Tower. We ended up playing three-on-three with a group of Live Oak regulars. There wasn't anyone there who could match the Ivory Tower's height (6'6"), so we won a whole bunch of games in a row. That's not the point. I just wanted it to be noted for the record. The point: Before one of the games, this dude looks right at me and says "Were you talking shit about me?"

I say, "Um, no." He says, "Don't be talking shit about me" -- still glaring. Now I'm freaking out. He's there with about ten of his friends, and I am certain that they wouldn't think twice about beating my ass, or at least threatening to, which for me is worse.

So I decided to go and smooth things over. I sat right next to him, looked him straight in the eye and said "I swear to God, we were not saying anything about you. Your boys know me (they did), and they know I just come here to play ball and I don't start any trouble." After the longest second of my life, he goes "Ok man, cool." Needless to say, I was really really relieved.

But what the hell? Why did I have to deal with that? I feel like I'm always having trouble there -- see "A bully made me feel bad." That court has a BAD VIBE. I'm saying it. It's true. Guys play high and drunk. Guys are always griping and posturing, trying to one-up each other. Now this isn't true all the time. I've played in some really fun games there. But too often, something dumb happens and I end up feeling crummy. I was glad that I could defuse the situation with Stop Talking Shit About Me Guy, but it was embarassing to have to go over to him in front of all his friends, including some girls.

Conversely, Pete and I had a really nice run over at Ohlone last night. We played competitive games with friendly guys, and we all talked to one another between games. We didn't bicker about the score and there were barely any fouls called or committed. (Plus, Pete and I went undefeated.) I rarely have a bad time at Ohlone, except when no one is there. There was even one time when I was shooting by myself at 11PM and a cop pulled up beside the court and told me I had to go home. But I didn't mind because he was so nice about it, almost apologetic. Now that's a court with a good vibe!

Am I just too much of a wuss about this? When I bring this stuff up with other pickup players I meet, I often get blank stares in return, or vague uh-huhs. Guys always want to talk about how good the skills are, how tough the run is. I just want to talk about how much fun I had or didn't have and if I liked the other players. Maybe I'm getting old, or maybe I'm finally becoming a woman.

Friends of Setshot: Tell me that you think about these things too.

When I used to have a Y membership in the far East Bay, I'd schedule my trips to the court around certain times of day.

I found the run isn't as good in the morning, but it's a whole lot more fun.

It seems like the general atmosphere all over America, basketball or otherwise, is getting meaner and meaner all the time. It's something in the air in the last decade or so.