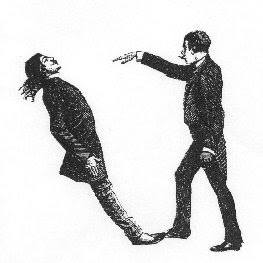 As I've gotten older and more injured, my game has evolved to compensate for reduced mobility and ever-slowing reaction times. Previous Setshot posts have discussed scouting, ball tricks and other strategies for remaining effective as an aging baller, but lately I've been thinking about different psychological ploys that can be used to deceive, demoralize or intimidate opponents. As a smaller player, I've always utilized these approaches to an extent, but in recent years I've had to rely on them even more, and I've found a few that work very well for me.

I think of many of these psychological strategies as "precedent setting." That is, they are things that I do early in games to establish a pattern that my opponent believes will continue. Later in games I may abandon them, especially if they have already accomplished the desired result.

1. I run harder when I sense my man is winded. Early on in games, especially the first game of the day, I often run out of air, only to regain it when my lungs adjust and I get a second wind. When I think my opponent is on his "first wind," I make it a point to run my ass off for a few plays, even if it kills me. I also do a lot of curling around screens because my man will have to expend energy to get over and catch me. The payoff can be great, as players will make defensive adjustments to my sprinting—such as giving me more space and switching more often on screens. I won't (can't) run this hard for the whole game, but my defender doesn't necessarily know that. One of the most common things I hear opponents say about me to their teammates is "he runs a lot." This is sort of true, but it's partially due to advertising.

2. Early in games, I box out hard on every play if my man is bigger than me. I don't want to deal with bigger opponents in the paint. I'd rather compete on the perimeter, where I'm more likely to have an advantage. So what I do is set a precedent by boxing out aggressively at the start of games. Again, I won't necessarily do this for the whole game, but I find that most pickup players don't really like to deal with this level of effort, and at the end of games, I almost always find myself guarding on the perimeter, no matter how big my man is.

3. I talk to imaginary teammates. What I'll do is call for a screen that isn't really there, pointing to a spot on the floor and yelling "Screen! Screen here!" to the empty air. To make it even more convincing, I open my eyes as wide as I can and nod, just like I would if I were really asking for a screen. If I sense that my defender has shifted in anticipation of the screen, I'll drive the other way, having been given a few extra inches of space. A similar trick is to yell "Post up!" to an imaginary teammate (or even a real one), hoping that my defender will drop off to guard the entry pass and give me space for a jumper. I did this last week, sticking a 15-footer as my young opponent fell back to double our center. As we were running back up court, my defender rolled his eyes, extended both his middle fingers and screamed "Yo f*ck you Jeff!" I loved it.

4. If my defender is watching me instead of the ball, I follow a nonexistent shot with my eyes. Try it. Just make your eyes and head do a parabola—like you're watching a jumper in flight—and see how often your defender will turn to look for it. (Make sure no one is dribbling at the time. The sound gives the trick away.) It's a great opportunity to run away from your man, and after you do it a couple of times, he'll start to get confused about when your eyes are lying and when they're telling the truth. He may even lose out on rebounds because he'll keep looking at you when a shot is actually in the air. More importantly, it will annoy him.

A related tactic I use is looking at the floor and acting nonchalant when a long pass is coming to me. My defender will be relaxed because it doesn't seem like anything is going on, but I'll suddenly wind up with the ball in my hands, racing towards the basket. I learned this one from John McPhee's book, A Sense of Where You Are, about Bill Bradley's playing days at Princeton. Bradley was reported to have outrageous peripheral vision (he could look at the floor and see the ceiling), and he did these kinds of tricks all the time.

5. I pass early and shoot late. Early in games, I try to play "true point," focusing on ball distribution and offensive flow. I'll be aggressive, but I'll mainly drive with the intention of dishing. On the perimeter, I'll mostly look to reverse the ball to the weak side, trying to make the defense to rotate and adjust. What I want to do here is make the defense forget about me as a shooting threat. Later in the game, however, I'll ramp up my shooting because I'm usually getting more space from my defender. I have a fetish for taking shots with the game on the line, and I think that this strategy gets me better looks during crunch time.

I still don't want to guard you.

I like the psychological advantage I get from having a large full beard. Especially early in the game, playing against new folks.

I inevitably get underestimated, mostly in the quickness and speed realm. After several fast breaks and drives to the hoop, the defender figures out I'm not as slow as I look, but for a while there it's pretty easy scoring.

You will find that your most successful basketball players are those who gave up many hours of their time to practice. They not only practiced during the season, but worked hard developing their game all year round. Working with a plan is a requirement of success. In order to become an outstanding athlete the beginner must observe certain training rules. A diet of soft drinks, candy, and hot dogs cannot and will not build a strong body. Foods should consist of green and yellow vegetables, meat and eggs, which are high in protein.

I think it is obvious to everyone to play it slow in the beginning and then pick up your pace in the end to throw them off.
But another thing to do is find your strength- outside shooting, or what have you.

And of course to keep playing a variety of players. To work your skills. I play a pickup league with constantly changing players.