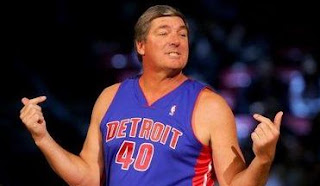 Have you ever played in a game in which there was one person who just ruined it for everyone else? In my favorite weekly pickup game, there is a guy who comes semi-regularly and poisons the whole atmosphere. Old School and Hops both play in this game, and they will agree that this guy (I'll call him "the Idiot") is a serious problem.

The Idiot is actually a good player. He is in great shape, works hard on both ends of the floor, and has a versatile game. Unfortunately, he is also psycho-competitive and talks constant trash. Now, I'm not opposed to a little trash talk, but the Idiot takes it way too far. His banter is not at all playful and he invariably upsets someone to the point of fighting (usually verbal, but it has escalated beyond that). He also likes to denounce his opponent after his team wins—in my opinion, a form of unbelievably poor sportsmanship. I'm the type of guy that normally recoils from conflict, but a couple months ago I got into a screaming fight with the Idiot because he was being such a jerk to one of my teammates that I couldn't hold my tongue any longer. In fact, the Idiot pretty much gets into a fight with one or more players every single time he plays. (If you're wondering if I'm doing any racial coding here, it should be noted that the Idiot is white.)

I think that the crux of the problem is that the Idiot's style is totally out of sync with the culture of the game. His never-ending belligerence shuts everyone down emotionally and saps all the fun out of playing. I've played in games where this kind of behavior would be slightly more appropriate, but the game I'm talking about is a "nice guys" game. The same people come out every week. We all know each other and for the most part, genuinely like each other. The games are very competitive, but the governing code of the court is to be considerate, friendly, and a good sport in both victory and defeat. Trash talking is kept to a minimum, and when it's done, it's without malice. That's why the Idiot stands out so much. His poisonous attitude is just a total wrench in the works. Last week, to the shock of many, one of the nicest players in the game lost his temper and yelled at the Idiot: "This game is normally so much fun—except when you're here!" The rest of us were thinking the exact same thing.

The basketball court is one of the few venues in polite society where strangers can come together and compete in a casual way. Everyone has a right to show up and play, but when games develop a regular cast, as ours has, there is a tendency to want to exert control over the playing roster. However, there is no easy way to exclude someone like the Idiot from participating. We hoop in a public park and abide by the rule that if you show up and call next, you play next.

So Setshotters, what can we do? Is there any way to discourage him from playing? And when he does show up, how can we minimize the effects of his poisonous personality?
Posted by Jeff at 4/28/2008

This is something I've given a lot of thought to, for obvious reasons. Another game I used to play in once moved to a different court and then a different day just to try to lose a certain player--although this guy wasn't poisonous exactly, just got on everyone's nerves for reasons that were hard to pin down. You hate to go to such extremes, though, and it's not always practical.

I'm not sure what can be done, really. Maybe you could present that person with a signed petition asking him not to show up anymore? Or a referral to a therapist who could help him with his obvious anger issues? A one-way ticket to the East Coast, where aggro shenanigans fit in a bit better?

In terms of minimizing the damage, about all you can do is ignore him as much as possible--let him be a jackass and call idiotic fouls, but don't feed the fire by responding. Easier said than done though. The specimen you're describing is an example of possibly the most obnoxious kind of basketball player: a hard-nosed, physical player who's also a whiner. He'll put his shoulder down and plow straight through you on his way to the basket, but God forbid you swipe at the ball or hold your ground on a boxout. Now, there's nothing wrong with being physical; what's insufferable is this particular combination of being physical and brittle. It's an annoying situation, overall. I hope someone out there has some brilliant ideas.

Good observations B. I hadn't really identified the "physical plus brittle" issue, but you're spot on. In fact, the fight I had with the Idiot resulted from his accusation that I was boxing out too aggressively and might hurt him. (I'm 5-8 and 155lbs.) Right after he accused me of that, he rammed his shoulder into my sternum. WTF?

I also play with the Idiot. The physical/brittle double standard is quite apt in this case. There's nothing more maddening than aggressive players calling wussy nonshooting fouls.

I didn't hear Bill's comment, but it's really perfect and I think we should think about expressing collective sentiment earlier in the game, as opposed to after there is a specific injustice (in the mind of the Idiot).

Alternatively, it might make sense to go in the opposite direction: just argue with him & get him so wound up that he storms off--which happens quite often.

I have two alternative solutions. The first one isn't one you're going to like...because I don't like doing it. You need to import a thug to "regulate" him. We had one, and he dissappeared shortly after a physical confrontation with the thug.

Option #2 takes longer, but is also effective. If enough of you let this guy know he's messing things up--and confront him EVERY time he does something idiotic--you'll either get him to try & control himself a bit, or he'll get annoyed by all of you "naggers," and find somewhere else to play. (Note: this could take months, but will eventually work.)

One great thing about the SC game is the effect the "nice guys" had on the whiny/inconsiderate players. With the recent absence of some of the game's regular players (notably you, Bob, Drew, etc.), the whininess factor has grown exponentially. I find that even the most mundane disagreements (fouls, out of bounds calls, illegal defense, etc.) continue to linger until someone (or some people) lose their shit. A primary example of this occurred Wednesday night when an SC regular (I'll refer to him as "Sean Landeta" for obvious reasons) actually punted the game ball into a neighboring parking lot because about a foul on a previous play.

Unlike "The Idiot", I actually like playing with "Sean Landeta". He's a great ball player and fun to play with when he can keep his emotions in check(usually when he's winning). Unfortunately, his incessant bitching and moaning have begun to irk me to no end.

Sadly, the situation is a bit trickier than with The Idiot because Landeta is: A) younger and more emotionally volatile; and B) more of a fixture at SC.

Any parting advice from a wise veteran?

I'm with you Ben. I like Landeta as well, but he's just a kid so I tend to give him a pass on his immaturity. The Idiot, on the other hand, is a full grown man, and should be above this kind of behavior. Also, the Idiot tends to threaten violence with regularity, which is way over the line in my book. Say what you will about Landeta, but I've never seen him get into a physical altercation and I rarely hear him threaten violence.

I think that Landeta is actually more controllable that the Idiot because Landeta actually cares whether people like him. Plus, he'll probably get better as he grows up, whereas the Idiot's behavior will not improve without some sort of intervention.

just to let you know I've gotten back on the court again after about a year off...rusty and i'm in 40 plus shape despite not being in my 40's yet. Today was my 3rd game back and you'll be happy to know I was flashing signs of that late-career Mark Jackson-like game that made me infamous at Cardinal Spellman, Bergman, and 2nd Ave...