Etiquette: When should I call fouls? 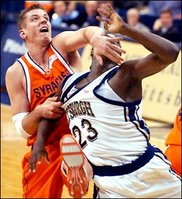 When I was coming up in the not-so-mean streets of South City, Wichita, KS, my friends and I called or didn't call fouls based on the situation. When we played among ourselves, we almost never called them. Fouls were for punks. If you went up strong enough you should score whether you get fouled or not. It was like a form of training for all the three-point plays in our future. One of our favorite games was hustle (21) with no fouls, no out-of-bounds, no backcourt, and tip-ins worth three. If you added beer, it got pretty brutal.

But when we took our daily two-mile hike to Lynwood rec center, things were a little different. We rarely called fouls there either unless they were hard ones that really altered our shot and the game was close. But we rarely needed to call them, because usually the guy who fouled you would call it himself. And if we fouled someone, we would do the same. Not only that, but people generally tried to play clean. I know it sounds like a church picnic, but that wasn't it. Lynwood was a place that people came to from all over the city--from four different high schools--East, West, South and Bishop Carroll. And Lynwood, like basketball courts in most cities, was one of the few places where whites and blacks interacted in public. There were even lesbians. People had to get along and wanted to get along. Basketball was a common language and people with skills and the right ethic had each other's respect. Calling the fouls you committed was a way of showing that respect.

On an anonymous court in Berkeley, I recently encountered a different foul-calling code of ethics. You call everything because winning depends on it. And in fact, not calling fouls means you're a punk because you're not standing up for yourself and your team. And if you don't call fouls, the other guy will simply foul you again, but more brutally, because you've allowed him to do it. Not only must every foul be called, but every foul must be disputed. And only punks back down from confrontation. For me, it's not a lot of fun. I think this ethic is accentuated because there is only one court and a lot of people are waiting to play, but it also seems to be a particular form of machismo. It's interesting that machismo can be expressed by either being too tough to call a foul or so tough that you call all fouls without fear of a beatdown. Needless to say, I don't play there anymore.

I was playing a pickup game with friends on the hot summer courts of Austin, Texas, and while defending a buddy of mine (we'll call him "Ben"), he had gotten behind me, received the high-low entry pass, and went up for the bunny. I was hoping to block his shot from behind, and I fouled him solidly enough that I called the foul immediately on myself. I stopped playing. As he had already gotten his own rebound and was in the process of going back up strong, he scored and uttered something to the effect of "I'll call my own #$$%&@ fouls!" Okay, I thought, if he wants to play that way then the next time he will sure-as-hell call the foul.

A moment or two later I soon found myself on his backside again as he received the entry pass on one of the blocks, and I was poised to unleash some unholy swattage on him from behind. Unfortunately, he pump faked me completely out of my jock and into the air, and as I helplessly came back down to earth he jumped up to lay in the easy deuce and in the process rammed the top of his head into my left eyebrow. I was dazed and probably concussed and I wandered off the court. He was pissed because he thought I had dropped a hellacious elbow onto his head, and when he heard someone scream, "HOLY $^%@ HE'S BLEEDING!!!" my buddy was like "I'M NOT $&%^*@ BLEEDING!" and I think he was probably looking around to give me a piece of his mind.

My friends caught up to me wandering down the street in a slight funk and in the general direction of my home, and despite their protestations I assumed that I had "just" knicked my eyebrow like TV wrestlers do with those stashed razors in their waistbands, putting out lots of blood from typically small little cuts. When I got to my front yard and my roommate saw what had happened, he threw me a towel and I attempted to wipe off the blood. When I got my thumb hooked up inside the three-way eyebrow blow-out that I had up to then underestimated, I decided that in the future I would go easy on folks who preferred to call their own fouls. I wore a bright pink scar that looked like a jagged "Y" to my wedding two weeks later, and to this day I think of my buddy Ben everytime I look in the mirror.

How wimpy is it to identify an anonymous location for bad foul-calling etiquette and then not ID to game? VERY!

The only reasons I read a blog is to learn or to be entertained. Your story that you didn't like the machismo of a call-everything game was undermined by not identifying the game.

I suspect the game was predominantly African-American--and you are not. So what? This is basketball and that is not uncommon. Deal with the culture of the game, change it, or don't play.