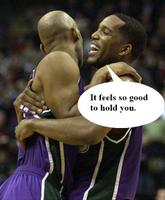 Sometimes, you play with a person that you just absolutely click with. Stockton and Malone. Jordan and Pippen. Nash and Stoudamire.

When I was a teenager playing at Temple Field in the Wapp Diggity, I had a buddy named Rusty that I had awesome chemistry with. For about two years straight, we were an unbeatable 2-on-2 tandem. Rusty had barely played any basketball before he was about 14. When he started playing, he found that he had an uncanny talent for long-range shooting. With a weird (and very quick) Tim Hardaway kind of release, Rusty would just KILL you from the outside if you left him open. He had NBA-three range by the time he was 16. Rusty was a perfect complement to me, as I was a poor shooter, but very good at getting to the basket and finishing. We ran two plays. One: I drove to the basket and kicked to Rusty, who knocked down the trey. Two: A give-and-go that ended with me receiving the ball in the lane. If the defense doubled, I'd kick it back out. If not, I'd try and find a good shot near the hoop.

Our top rivals were Tony and Gooch - two other local kids. Tony and Gooch would give us good games, but we were a touch better and they rarely won. One reason for this was that they would always end up fighting when they started to lose, while Rusty and I would take a time out and try to figure out what was going wrong. Chemistry almost always won in the end, and after the games, Rusty and I would guzzle a cold two-liter bottle of Crystal Pepsi in celebration, then retire to my house to watch 21 Jump Street.

Oh my God, did you say "Wapp Diggity?"