Relationships: Where do you fit in? 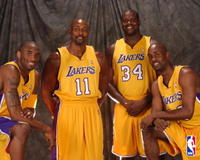 No one wants to be the worst player on their team. That's no fun at all. But which do you prefer: to be the best player on your pickup team, or to be a role player? I think that there are arguments to be made for (and against) both.

Because Old School and I play at parks where the level of competition varies widely from game to game, there are times when I am the best player on my team, and other times when I am not nearly the best. I'm not sure which I prefer. Being the main offensive threat and de facto leader of my team definitely makes my ego feel good, but it also bestows a sense of responsibility that I do not always want. When we win, it feels great. When we lose, I am filled with doubt and self-criticism. Also, if I'm the best player on the team, it means that our team is not all that good.

On the other hand, being the fourth option isn't so hot either, especially on a selfish team where I'm not going to get a lot of touches. When I feel neglected by my teammates, I am less inclined to work hard and do things that will ultimately go unnoticed and unappreciated. The other night I was playing in this exact situation. I was the fourth or fifth option on my team, which was full of ballhogs. I barely touched the ball, and scored maybe twice in three games. To make it worse, every time I touched it, my teammates would start screaming "Jeff! Jeff!! Jeffrey! Here! Right here! JEEEEEFFFFFFRRREEEEEY!" This rattled me and made me insecure, and I played well below my abilities. Our team won over and over again, but I felt no satisfaction.

I guess that my ideal situation is to be the second scoring option and the first ballhandling option on a team of unselfish players. But this does not happen often, and I need to find ways to better deal with the more common situations mentioned above.

Setshot would love to hear your thoughts on this issue.

Chris Webber I am looking at you.

While I'm very rarely the best player on my team, if I ever find myself playing with a bunch of better players and/or ballhogs, I try to play even harder. I try to get my own touches by playing good D and crashing the boards. Usually (not always) I earn enough respect to get a pass or two, then immediately lose that respect when I blow a wide-open jumper.